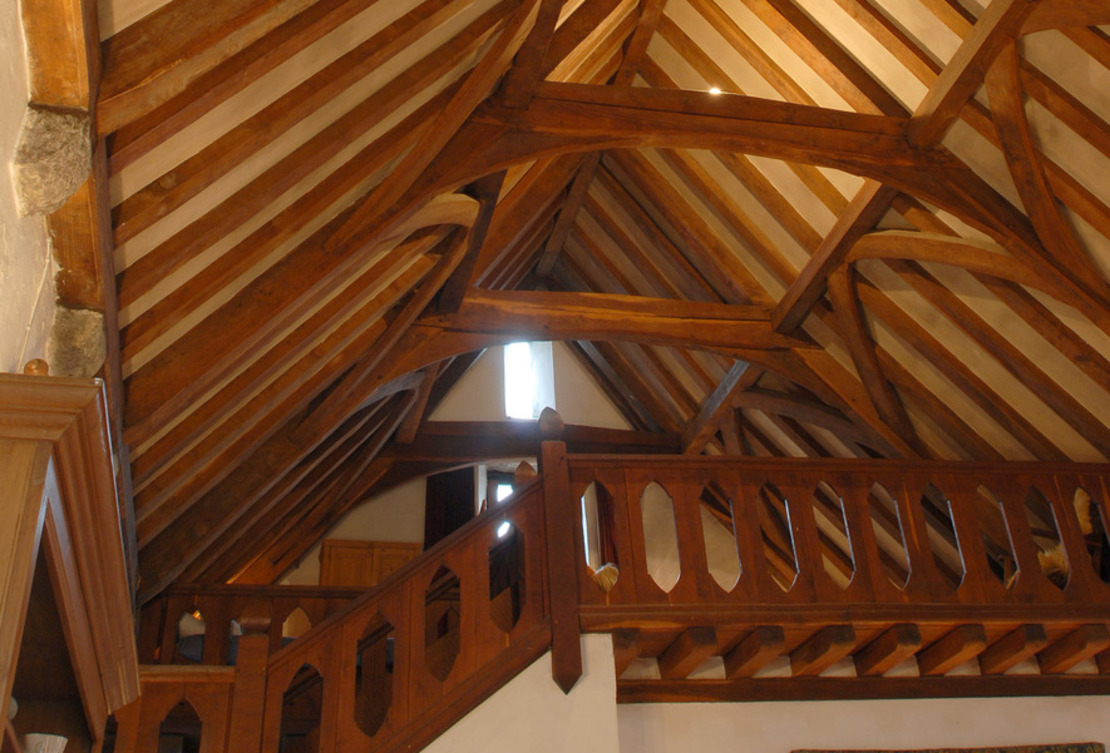 Description of the Interior

The ancient-looking, nail-studded front door on the ground floor, often mistaken for an authentic antiquity, was actually made by the owner during the building's restoration in the 1970s.  Round the corner, an imposing stone staircase leads to another grand entrance, into the lofty, oak-beamed Great Hall featuring a wide, stone-arched fireplace that provides a comforting aroma of turf and wood-smoke.

The Great Hall is the central living and dining area of the castle. It features a mix of old oak and comfortable modern furniture surrounding the welcoming hearth. Its white walls are extensively decorated with art including tapestries, brass rubbing portraits of ancient kings and knights and a magnificent triptych featuring a Galway galleon (as on that city’s coat of arms). There is a tiny but well-equipped kitchen next door with a view over the tall trees of the Pleasure Ground.

On the same level as the Hall is an oak-beamed double bedroom with a king-size bed and bathroom.  A stone staircase winds upwards over this master bedroom to a family loft room overlooking the Great Hall. Another winding stairs leads up to a little single bedroom in the corner tower.  From both of these second-floor rooms you can stroll out onto the castle parapets with fabulous views of Lough Corrib and the hills of Connemara and Mayo, and even those of Clare, on the other side of Galway Bay.

The rest of you sleep in the four cosy 'Vaults' on the ground floor below, their walls also lined with tapestries and other artworks. The Vaults have much picturesque charm with their oak-timbered partitions, arches and vaulted ceilings, and they work if you know each other well as the rooms lead one into the other. Vault I, the largest of the four, sleeps two in bunk-beds and features a fair-sized work table and chairs for busy teenagers and a mini-sofa for one or two in the window embrasure. Vault II (off No. 1) has a double bed and a similar window seat. Vault III (also off No.1) has one double and one single bed and a window seat. Vault III in turn gives access to Vault IV, a small single room with a three-light gothic window looking out at the standing stone sundial on the lawn.